I recently travelled from Louisville, Kentucky back home to Calgary, Alberta. The trip required a stop over in Chicago, which ended up being an overnight. Having your travel plans ruined is a frustrating experience, especially when you have family and ministry commitments to get back to. I finally got back, a day late and a hundred dollars short! But the adventure gave me a thought about the spiritual journey all believers are on. 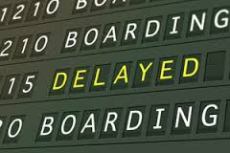 This was one of those trips where nearly everything went wrong. We boarded and then deplaned in Louisville. Then we re-boarded and took off a few hours late.  In Chicago we missed our connection by 20 minutes. After a long wait in a customer service line, I was told that my bag was inaccessible in transit and that I could not get on a plane until the next morning. I began calling long distance home to try and find someone to preach for me, and to re-arrange my ride from the airport.

I was given a hotel voucher, with the promise of a discount from the airline, which ended up still being medium expensive. I also had to buy toiletries from the hotel confectionary, and was given a room directly beside the elevator. After dreaming of ascents and descents for maybe 3 hours… I was back on the shuttle to the airport.

I had a McDonald’s breakfast and found my gate. The plane scheduled to depart an hour before me, was still there and delayed. I predicted we would have our gate changed to the far side of Chicago O’Hare, which for those of you who have not been there, means a 20-30 minute walk.

Turns out I must have a prophetic gift! After the long stroll, we found our flight delayed an hour. Finally aboard, we were told there was a problem with the Lavatry and we would be delayed. That delay ended, we were told to de-plane so they could fix a flat tire. I went back to McDonald’s for lunch.

Did I mention the air system on the plane was glitched so that it was pouring heat into the cabin? Well, a day late, a (hundred) dollar(s) short, I finally hugged my wife at the Calgary Airport swearing never to fly that particular airline, or go through Chicago O’Hare ever again!

I can take this whole experience as an analogy, for the way the Christian life can feel. We are on a journey to holiness, right? Several times, the New Testament mentions that we were chosen, “to be holy and without blame before him” (Ephesians 1:4). Peter refers to our Salvation as being “for obedience” (1 Peter 1:2).

But my journey to obedience is often like my Journey from Louisville. It is chalked full of delays and breakdowns. I board the holiness plane, all excited to see how the journey will go, only to deplane as I blow a tire. Is this really the way it is supposed to be?

What can I do? Should I swear off the holiness plane altogether? Go a different way? There was a popular movement in the beginning of the last century, which essentially took this approach, with slogans such as “Let go and let God.” There is some truth to this. We do need God, obviously. At this point I could make all kinds of plays on my analogy, God pilots the plane… or maybe he’s the airport authority?

But the main thing I thought about, through the whole duration of my trip, was the destination. I wanted to be home. That is where the rubber meets the road of my Christian life too. I am tired of struggling with sin, struggling to arrive at holiness.

But here is where the analogy gets blown. There is nowhere we need to go, to arrive:

His divine power has granted to us all things that pertain to life and godliness, through the knowledge of him who called us to his own glory and excellence, by which he has granted to us his precious and very great promises, so that through them you may become partakers of the divine nature, having escaped from the corruption that is in the world because of sinful desire (2 Peter 1:2-4).

Notice that we already have “all things” that we need “through the knowledge of him who called us” and that through his promises we “may become partakers of the divine nature, having escaped from the corruption that is the in the world because of sinful desires”. There is no destination we need to reach, to be ‘with him’. God is with us in Christ by the Holy Spirit. We are not travelling to find the answers. We are travelling with the.

Peter makes clear that it does not end here. We still need to get on the plane, “For this reason” verse five starts, referring to what we have, “make every effort to supplement your faith with virtue, etc., …”

I think we do need to make the kind of decisions I made about air travel; try a different company, go through a different airport. But all along, remember that we already have all the resources for holiness in Christ. So we need never look beyond him to a far off reunion.

No what we need is to walk with him: get to the gate on time, get on the right plane. Sometimes circumstances happen outside of your control. That led to my spending an extra day in Chicago… but you know what’s amazing?

Some folks did not get to Calgary the second day. You know why? They gave up. They didn’t make it back on the plane! One man was so angry he had a fit and left the airport. Some, we have no idea, but their seats were empty when the journey resumed.

That is the ultimate lesson, which I am taking from my trip. Hold fast to Christ and keep going on the journey. You may end up getting their a day late and a dollar short…but you’ll get their, because “God is faithful” (1 Corinthians 1:9).